Life Cycle Associates Report: GHG Emissions Reductions due to the RFS2 A 2018 Update

“The expanded Renewable Fuel Standard (RFS2) has resulted in aggregate GHG emissions reductions from the use of biofuels, which exceed the original projections from the Environmental Protection Agency’s (EPA) final rule for the first 10 years of its implementation. The RFS2 has resulted in significant GHG reductions, with cumulative CO2 savings of nearly 600 million metric tonnes over the period of implementation. The GHG reductions are due to the greater than expected savings from ethanol and other biofuels. These emissions savings occur even though cellulosic biofuels have not met the RFS2 production targets. In addition, EPA underestimated the petroleum baseline in the Rule. Studies by Life Cycle Associates and the Carnegie Institute have shown that the GHG emissions from U.S. petroleum are higher than the EPA calculated in 2005 (Boland, 2014; Gordon, 2012, 2015). This study calculates the annual U.S. petroleum GHG intensity based on the changing trends in feedstock availability over time and determines the GHG savings calculated from the aggregate mix of renewable fuels. The GHG intensity for each category of ethanol plant and biodiesel feedstock is estimated for the resource mix over the past 11 years and combined to determine an aggregate estimate. Figure 1 shows the total emissions reductions from the RFS2 compared with the GHG reductions projected from the rule.” 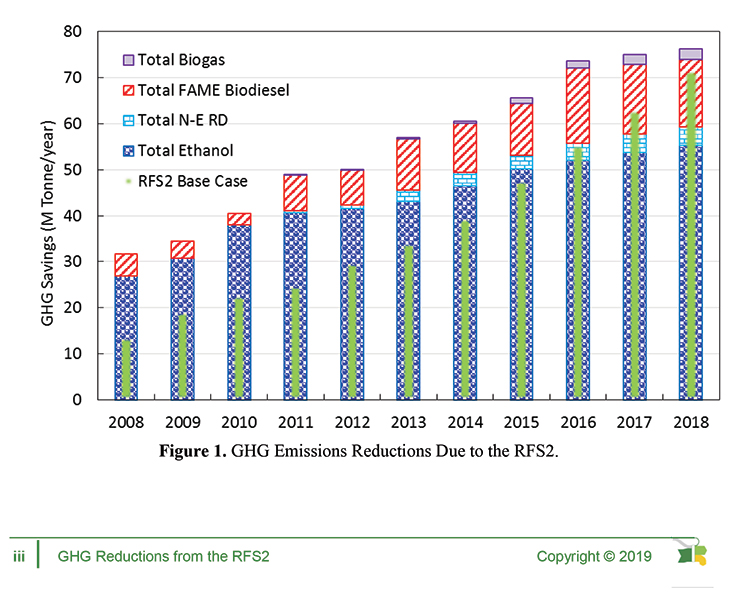 – Life Cycle Associates: GHG Emissions Reductions due to the RFS2 A 2018 Update